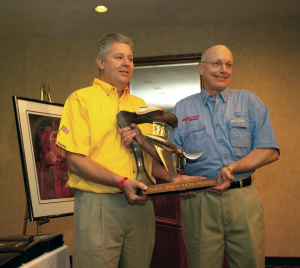 Memorial Sculpture. Randy Scism received the award in conjunction with the 2005 Miami International Boat Show. Fred Kiekhaefer presented an original sculpture by Milwaukee artist, Tom Queoff, The bronze and stainless steel artwork is a stylized depiction of a racing gearcase cresting an ocean swell. The sculpture passes each year it is earned, to another honored innovator.

Limited Edition Print. As a permanent award, Marine Technology received a limited edition print (#9) of a George Bartell painting. The print is signed and numbered by the artist and only given to recipients of the E.C. Kiekhaefer memorial Award.

Prior Recipients. The award originated in 1983, but was withheld for lack of qualified recipients in years 1987, 1991 through 1995, and 1997 through 2003. The 1996 award was presented to Pat Weismann for dry-sumping the Mercury Racing Six drive. The 1990 award was presented to Mike Peters for his C.U.V. boat design. In 1989, Tom Gentry was honored for the Gentry Turbo Eagle, an eight-cylinder, twin-turbocharged engine. In 1988, Seatek diesel captured the prize. The 1986 award went to Douglas Marine for the success of the 24 Skater catamaran. In 1985, Lamborghini received the award for their twelve-cylinder race engine. In 1984, Mercury Marine was honored for the MerCruiser IV surface drive. In 1983, the first award went to Cougar marine for advances in racing hull design.