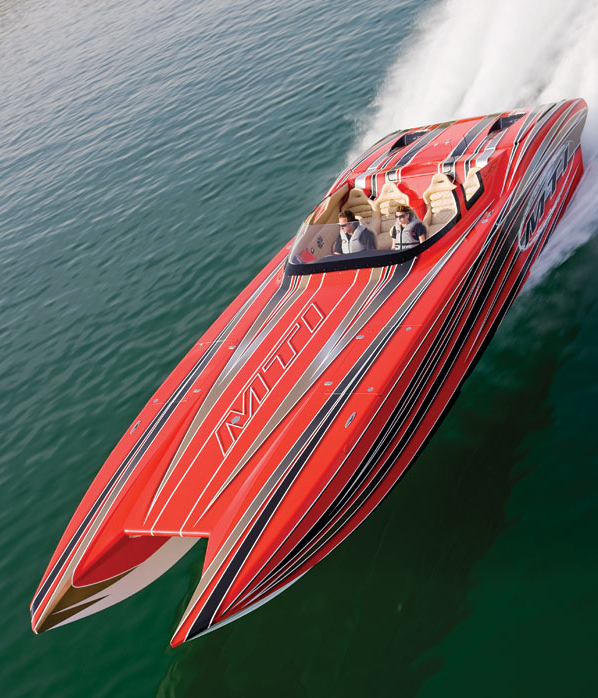 On just about every major lake with a sizable high-performance-boating fleet, you’re sure to find an MTI or two in the mix. The rare exception is in California and Arizona where the catamarans can be harder to find than a state with a budget surplus.

So when it came to designing the new 36-foot catamaran, Marine Technology Inc. owner Randy Scism had the performance scene on Arizona’s Lake Havasu in mind. For a lake that has long been dominated by West Coast custom sport cats, Scism sees his new 36 Race/Pleasure as a perfect alternative.

With a beam a full 16 inches wider than most sport-cat offerings, the 36 Race/Pleasure is still small enough that an owner can tow it easily through the desert but large enough to handle the roughest of conditions on Lake Havasu or Nevada’s Lake Mead.

MTI delivered its first production 36-footer to the 100-mph Roundup in Parker, Ariz. Equipped with twin Mercury Racing HP700SCi engines and NXT1 drives, the catamaran was good for 128.4 mph at 5,250 rpm. According to the GPS, the builder has seen a higher top speed (134 mph), but conditions on the Colorado River were too windy and choppy during the testing window to reach that speed.

When the 17″ x 39″ five-blade propellers from Hering hooked up, the cat got on plane in 7.8 seconds and was running a mere 68 mph in 20 seconds. The 36 Race/Pleasure did have a small hop in the 70-mph range, but it quickly disappeared as the catamaran got more air underneath it. The boat cruised comfortably at 81 mph with the engines turning 4,000 rpm; nudging the throttles forward, it ran 122 mph at 5,000 rpm.

Test driver John Tomlinson gave the stepped catamaran perfect marks in slalom and full turns, and noted that the visibility out of the windshield was stellar.

The boat was a true six-seater with individual buckets for everyone on board. Passengers sitting in the rear had a grab handle to hold onto if the water got rough. In the console between the driver and co-pilot, the in-house-built throttles and shifters were color-matched to the boat’s $35,000 custom paint job.

To keep tabs on speed and engine functions, MTI provided a large GPS/video screen in the dash as well as a Mercury SmartCraft VesselView system. Monster rpm gauges from Livorsi Marine, along with the stereo controls, were in front of the observer’s spot to port. To keep things cool in the cockpit while running at speed, MTI incorporated small air vents.

Not lacking for stowage space, the boat had glove boxes to the outside of the front bucket seats and a large locker behind the rear seats in the space between the engine hatches.

The catamaran also featured an optional day cabin that could be accessed through two large hatches in the deck. Carpeted throughout, there was a rectangular berth and a pair of bench seats.

It’s hard to find a builder that does as good of a rigging job as the team in Wentzville, Mo. The individual engine hatches opened vertically on a single hydraulic ram. The compartments were painted red and the bilge was so smooth it looked like you could skate on it. The covers for the drivelines were painted red to match the rest of the boat.

Although there wasn’t a lot going on in the engine compartments, MTI’s rigger did a stellar job running the wires and making sure they were properly supported. Some nice custom touches included the billet air vents with the MTI logo that were built into the engine hatches and the rear of the engine compartments just above the integrated swim platform that covered most of the drives.

The competition for the high-performance boating dollar on the West Coast is fierce and, at nearly $600,000, MTI’s offering is on the higher end. But for the price, the 36 Race/Pleasure—a big boat that more than comfortably seated six—was at the head of the class when it came to performance and workmanship.—Gregg Mansfield 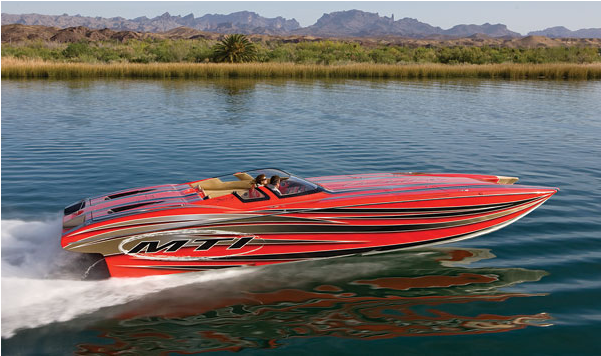