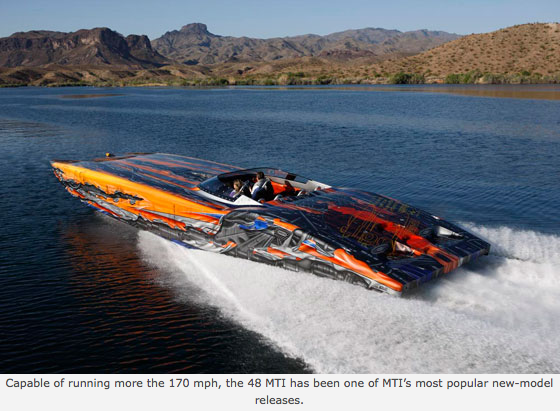 Two years ago Marine Technology, Inc. introduced its 36-foot-long catamaran. Based in Wentzville, Mo., the high-performance catamaran builder already had 39-, 42-, 44- and 55-foot long models. The thinking was that new 36 would be an entry-level boat —if there is such a thing as entry-level in the exotic custom go-fast world. Depending on power and options, the 36-footer lists for $400,000 to $600,000.

Just six months later, the company released its 48-footer, definitely not entry-level with a price range of $800,000 to $1.4 million, depending on power and options. Any way you look at it, that’s a lot of dough for something with six seats and no cabin. But then, there’s nothing inexpensive about the custom go-fast boat world.

Now, guess which model has been the bigger seller? If you picked the 48, you’re correct. To date, nine have built, which is more than double the production of the 36. And if you find that strange or even ironic given the economy of the past few years, you’re definitely not alone.

“We were a little surprised,” says Randy Scism, the owner and founder of MTI. “I think there are two reasons the 48 has been so successful. First, it gave our existing customers a way to move up the ladder. Second, our timing was great with the Mercury Racing 1350 engines coming out around the same time. It’s a great platform for big power.”

Loyal MTI customer Albert Haynesworth, a defensive tackle for the Washington Redskins, reinforces Scism’s point. Not only did he step up from a 44-foot-long MTI cat to the 48-footer, he’s changing out his twin Mercury Racing 1025/1200 engines for a pair of Mercury Racing 1350s. (Race fuel and added supercharger boost increase, which can be done with the flip of a switch, take the engine from 1,025 hp to 1,200 hp.) 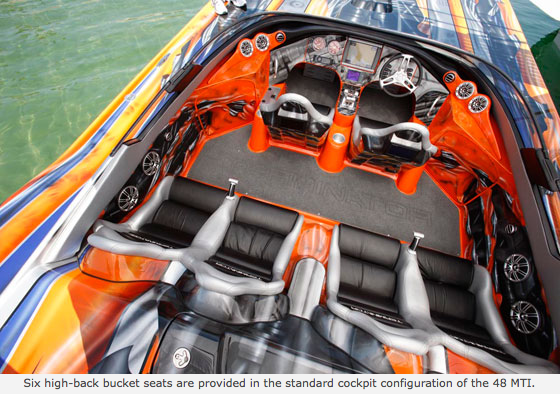 Last April, I had the pleasure of helping evaluate Haynesworth’s catamaran for Powerboat magazine with professional test drivers and world champion offshore racers Bob Teague and John Tomlinson. The boat topped out at 162 mph with the engines in 1,200-hp mode, and earned great reviews from both Teague and Tomlinson. With the twin-turbocharged 1,350-hp engines, Haynesworth’s boat likely will run well into the 170-mph range.

A speed-lover to his core, Scism was the general manager of the Dubai-based Victory team, which competes in the Union Internationale Motonautique Class 1 offshore catamaran racing overseas, for eight years. He throttled for the team for two years after that, before starting MTI in 1999. At the time, the dominant high-performance catamaran company in the United States was Douglas Marine, which builds the Skater line of cats. While it would be unfair to say that MTI has “overtaken” Skater, it’s reasonable to say that MTI has provided solid competition in the big-buck go-fast catamaran market.

So, what’s it like to go 162 mph on the water? Having been there and a little beyond in a few other cats, I can say that in the right boat—like the 48 MTI—it doesn’t feel tremendously fast as long as you look at the horizon. Look down at the water and it feels silly fast, cartoon fast. And once you’ve been there a few times, you pick up on small sensations like if the boat feels light and slippery (bad) or solid and planted (good). On my ride, the 48 MTI felt solid and planted. And my bucket seat was so comfortable I could have fallen asleep in it, if not for the roar of the wind at that speed.

What didn’t I like about it? OK, the color scheme was a little over-the-top for my tastes. Then again, I’m not exactly a badass NFL defensive tackle. (Please don’t crush me, Albert.) Regardless of my subjective take on the boat’s paint job, it could not have been better applied.