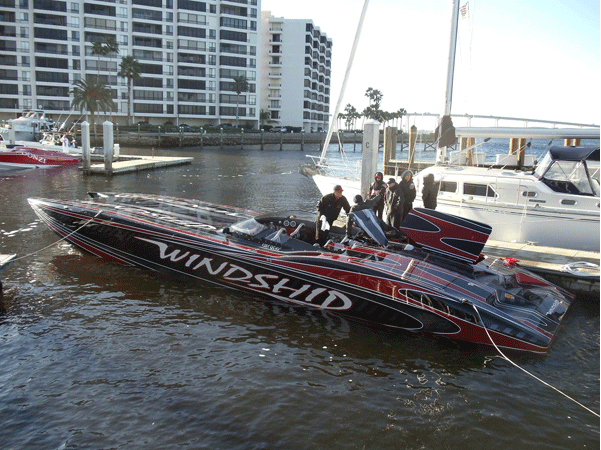 During the recent Powerboat magazine boat tests in Florida, I was given the opportunity to experience firsthand the magnificence that is Mercury Racing’s new turbocharged 1350s. The occurrence was made all-the-better by the fact that they were loaded into John Woodruff’s new (as in a week old) Marine Technology Inc. (MTI) 48-foot catamaran, Windship, and connected to the new Mercury M8 drives. But, before we get into the meat of this monster machine, let me lay down some background so you can grasp the situation at hand.

I was feverishly checking the weather the weeks building up to the boat tests, which were to occur on the west coast of Florida in the lovely town of Fort Myers. Although it was Florida—and I’d never been to Florida when it was less than 65 degrees—it was in fact December. As the days drew closer to our arrival in Fort Myers, I noticed a cold front was moving into the area. Not just any cold front, but a near-freezing cold front. We arrived Sunday night after dark at the Sanibel Harbour Resort and Spa and yep, it was cold!

Monday morning came, and I awoke to wind and weather in the low 50s. I gazed out of our hotel room and there, backed into its slip like a black panther ready to pounce, was John Woodruff’s 48 MTI. With its mostly black paint scheme, accented with metal-flaked candy red and silver, it was ominous looking and screamed out from the cold weather, “Unleash me!”

On Tuesday, the weather once again dropped and it was now 39 degrees as testing and inspections on the various boats began just after sunrise. While shooting photos of John’s boat, I was introduced to his lovely girlfriend, Nancy Hancock. It’s hard not to like John and Nancy from the instant you meet them. 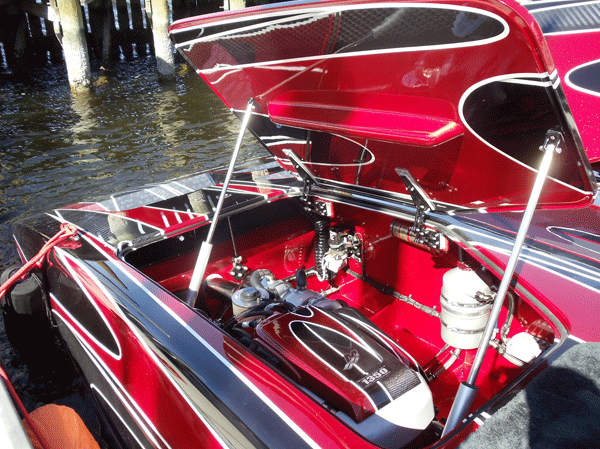 Smiling from ear to ear with pride and joy, they gazed upon their new toy and welcomed us aboard. John began pointing out the cool gadgets and creature comforts that has brought MTI to the forefront of custom-built, high-performance catamarans. Intricate touches such as the iPad built into the dash to provide internet access and a full music library to the enormous sound system, several TV/GPS screens in the dash, seat backs and gunwales with built-in forward- and rear-facing cameras, billet and custom-matched painted accents throughout the cockpit, heat/air conditioning system pumped in through billet adjustable vents (it was definitely heat blowing in on this day) and, of course, the twin Mercury 1350 engines with their massive turbos strutting out from the custom-painted cowling cover.

As the day wore on and the tests were coming to an end, the sun began to dip across the bay. The weather had warmed up to maybe 50 degrees and I caught John and Nancy at the dock, fiddling with the plethora of high-end gadgets. John had promised Powerboat’s sales manager Ryan Johnson and I a ride in his magnificent machine earlier in the day, so I asked if he was still game. At first, John was unsure, for he had already wiped the boat clean for the photographs and had the cover nestled on the dash, prepping the boat for the evening.

However, after the suggestion and thought of running his beloved rocket ship one more time, and with a subtle urging from Nancy, we found ourselves quickly idling out of the Sanibel Harbour Resort marina and heading toward the open bay. John pointed out the various electronics and screens, pointing to the rear-facing camera and showing off the massive stereo. The boat idled smooth and glided flawlessly as we came up on plane. John explained that the throttles were electronic and touted their smoothness with a, “Here, push ’em forward, see how smooth they are…” I quickly and happily obliged. 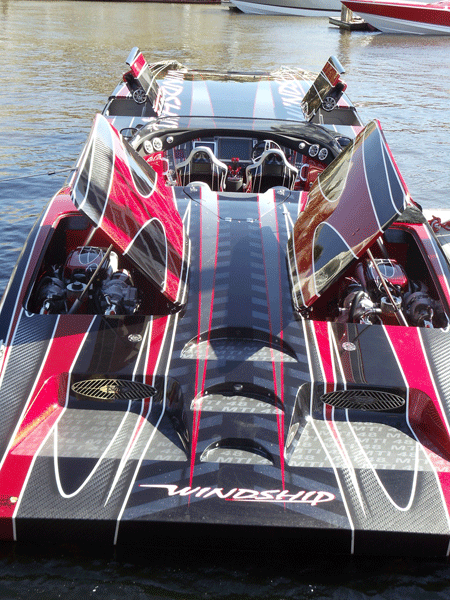 We ran out toward the open gulf bumping the speeds up from 60 mph to 100 mph, then to 130. John slowed and turned the boat, which stuck to the water like it was on rails, while Ryan and I turned back to steal glances at the massive rooster tail the M8 drives produced. Once the boat was straightened out, John once again pushed the throttles forward and the speeds quickly rose with astonishing thrust. We soon found ourselves rocketing across the one- to two-foot chop at 150 mph. I was able to snap a photo of the GPS as it was climbing from 147 mph and glance down at the throttles, which appeared to be only halfway forward. There’s a lot left in this beast, I thought to myself as we skipped across the top of the chop with the smooth consistency of silk sheets.

We soon found ourselves back at the docks and thanking John and Nancy for the terrific ride. I’ve said it before and I’ll say it again, it’s always a delight to see such good people have such good fortune. Look for the complete story on John Woodruff’s Windship 48 MTI in the next issue of Powerboat (my sources say it’s going to be on the cover, but you didn’t hear that from me), and in the meantime look for John and Nancy enjoying their new machine at poker runs across the country.