Teams, fans and some of the 1 in 16 Americans who live in the Greater New York Metro area will be treated to the fastest boats in offshore racing. Joining the Super Boat circuit, and in his first professional offshore race in the United States, is Tor Staubo from Oslo, Norway. SBI continues to attract international teams and Staubo (Team Gasse) will also be preparing for the biggest event of them all, the Key West World Championships.

Staubo shares his enthusiasm; “ I am very excited to compete in my first offshore sanctioned race in the United States this September in New York. I’ve raced for the past 5 years and to race here is great. I have the best throttleman in Johnny Tomlinson and my new 48’ MTI Raceboat was just delivered this week. The new MTI handles great and is really fast… this week I spent a lot of time testing it [48’ MTI].” Staubo continues, “people ask me what is my team name and what does it stand for and why a goose. I can say (GASSE) the translation in English is… Full Throttle or Goose It.” This past week, Staubo went 172 mph in the Lake of the Ozark’s Shootout sponsored by Super Boat International. To catch more about the goose, pick up this year’s Key West program and learn all about it.

John Carbonell, founder of Super Boat International recently sponsored the Lake Ozark event, which gives back and supports local charitable organizations. “Sponsoring an event such as Captain Ron’s Shootout (Lake Ozark) and producing the New York City Grand Prix which supports September 11 families and firefighters are very important to us. We have many volunteers, Coast Guard, law enforcement, rescue personnel and firefighters that help and support us throughout the year… we appreciate their help and could not do it without them.

Also joining SBI in New York is renowned boat builder, racer and legend… Reggie Fountain. Super Boat is very excited to have recently added Mr. Fountain to their Board of Governors and pleased he will be attending races more frequently as part of our Super Boat team. Fountain, unmistakably known for boats, has recently started a new company, Real Fast Powerboats, with sons Reggie III and Wyatt Fountain. “I am very honored to have John [Carbonell] ask me to be part of his Board of Governors and to include me again in offshore racing. I have been with John since the 80’s and to be around all these wonderful people and to meet new racers and teams is just a great feeling,” Fountain exclaims. Reggie Fountain, Reggie III and Wyatt’s new company provide service, repairs and new boats to the marine industry located in the State of North Carolina. 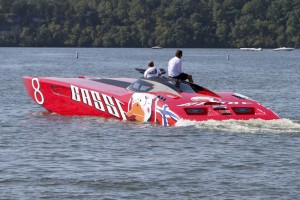 “Super Boat International continues to grow and, as we see many International teams entering this year’s Key West World Championships, it’s important we focus on making this the best racing organization for race teams,” comments Carbonell. “We have had some incredible years and a lot of history with Reggie [Fountain]. For him to come back and join us is most exciting. He has been very involved in our sport with his high performance boats and he is truly a fan of Super Boat.”

Boats will start arriving Thursday September 8th to Liberty Landing Marina in Liberty State Park in New Jersey. Fans can see their favorite boats up close Thursday September 8th and Friday September 9th. There will be one race on Saturday morning starting at 9:00 am. Race teams are scheduled to race 17 and 3/4 laps totaling 84 miles on a rectangular course just under 5 miles around. Fans can watch from both the New York and New Jersey shorelines.

This year’s event will be streamed live on Superboat.com so you won’t miss any of the action. The Super Boat racing season starts in the middle of May and runs through the second week of November, culminating with the Key West World Championships in Key West, Florida.