Speed On The Water MTI-V 42 Review 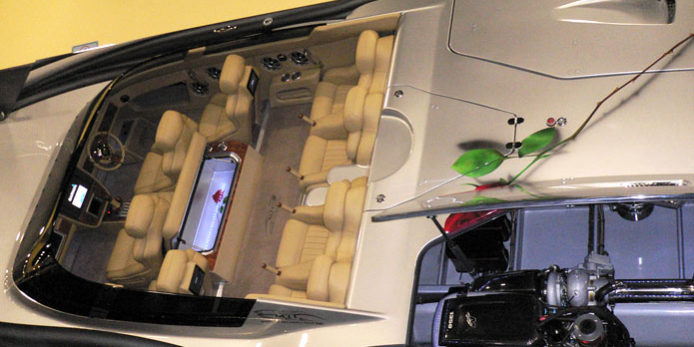 Mid-March, Speed On The Water reviewed our 42SV Center Console design, interviewing Randy Scism about its capabilities. Below is the featured article.

Marine Technology Inc. is hard at work on its patented design SV42 center console, the company’s first V-bottom model. In the final stages of tooling the 42-footer, MTI owner Randy Scism expressed his excitement for the boat, which he expects to perform better than anything on the market.

Scism and company plan to have the first 42SV on the water this summer. The test boat will be outfitted with triple Mercury Verado 300s to begin with and then quad Verado 300s. Power options will range from twin, triple, quad and even five outboard engines to inboard variations if a customer wants to go that route with a pair of Mercury Racing HP525EFI engines or even turbocharged 1100s. Scism believes the most popular package will be triple 300-hp engines.

Scism also said he’s had a great deal of interest in the seven- and eight-seat cockpits, the latter of which was on display in the striking Phantom model in the company’s Miami International Boat Show booth in February. Inspired by owner Ken Armstrong’s Rolls Royce Phantom, Scism said Armstrong not only wanted the extremely plush interior feel of his Rolls Royce, but he also wanted eight seats so he could take more people with him on poker runs.

Inspired by the automobile, the seats aren’t your typical bucket seats, but the configuration will work with standard seats as well. Designed with four bucket seats in the rear, the cockpit also includes a wide LED-illuminated cooler behind the driver and co-pilot seat, which are centered behind the wraparound windshield. Flanking each side of the cooler are two more seats, which provide a nice line of sight ahead for those passengers. (Look for a full feature on the boat in the next issue of Florida Powerboat Club’s Powerboating in Paradise magazine.)

“Like many of our boats, the Phantom came about because of a customer idea,” Scism said. “Our customers are our driving force because they always come up with something they want that we haven’t done.

“I have several customers who have asked about the eight-seater,” added Scism. “Unfortunately it’s not a simple retrofit project. We had to make quite a few changes to the deck, including moving the window forward 20 inches.”

The company’s recent seven-seat cockpit is also gaining traction as the design features three buckets up front rather than two, putting the driver in the middle seat.