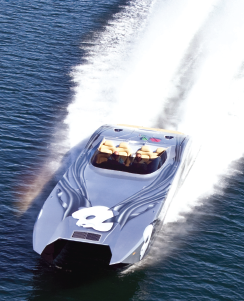 Check out this awesome article about the infamous MTI 48′ Phantom, as featured by PerformanceBoats.com!

Another brutish Phantom with a gentle side gets a standing ovation, behind 2,700 horsepower and impeccable orchestration.

Kenny Armstrong’s fabulous Phantom, a 48′ MTI on twin Mercury Racing 1350 power, is the latest in a series of masterpiece build-outs from Marine Technologies of Wentzville, MO. MTI is an entity that continues to define the boundaries of million dollar sport boating.

As for its $1.3 million replication price, the most notable thing about the number is how much Armstrong got for his money and the places his investment is taking him.

We’re not alluding strictly to this absolutely gorgeous rocket’s ability to find a 165-mph plateau when called upon. Indeed, the emphasis here was equally pointed to civility and drivability, two co-stars of this show that incubated a new phase in our team’s post-drive meeting: practical exotica. 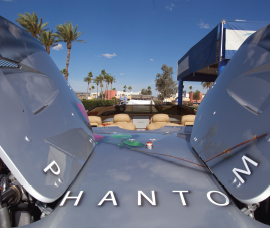 This MTI is defined not merely by its blistering top end but also by its dock-side handling and through zero-tolerance wake zones. The 48′ drove considerably shorter than its measured length, its engagement from dead stop was crisp, and acceleration hit harder than Pacquiao.

The pinnacle came earlier for us than the boat’s 165-mph summit, in an easy-breathing, 6,000 rpm all-day cruise mode that yielded 150 mph.

After all that has come before in the decades of our industry melding technology with artistry, the MTI—this MTI—is where we have come. Like the Opera, it’s a wondrous place.

On Board: The shadowy ghost-tones portrayed in this machine’s almost translucent surface, and elements of its interior, pay homage to two of its owners’ favorite indulgences: Phantom of the Opera and Rolls Royce. MTI spared nothing in leveling dramatics of their own while fusing the supercharged 1350s and Number 8 surface drives into this vacuum-bagged behemoth, one of their RP (Pleasure Race) series. 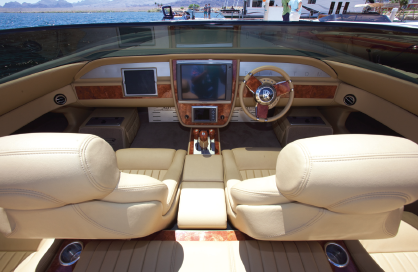 It’s no empty derivative—with the 2,700 horsepower on board, Phantom indeed carries the size and the steam of race-level offshore machinery. Ensconced into the spacious and very secure confines of its cockpit, it transforms into a pinnacle luxury vehicle, the rich detail of its burl wood dash and soft, camel leather seating prompted amazement. The rigging, bow to prop, was befitting the championship operation MTI has become.

It’s not mere showmanship. There’s enough of that in the detailed arc and flow of its inside tooling, and in an interior that is like nothing else at water line. MTI dispatches all practical onboard considerations, including its large-screen Garmin and Mercury processor, with the same level of understated finality and impeccable dress. Its drivability is a mere continuation of that quality of tone.

Performance: We couldn’t wait to find a runway on which to open up the 1350s, engaging the MTI’s midrange and cruise only made us want more. The supercharged engines executed and adapted flawlessly at low rpm, with acceleration at hand for the asking whenever we pegged the tach. The setup on this boat was a study in balance and the family experience sacrifices nothing to its warrior side.

The MTI starts, tracks, idles, and backs up crisply and effortlessly. It turns well at all speeds, and finds a notable second gear at around 50 mph, where the handling ramps up even another notch. From there, it only gets better. “You forget you’re in a 48′ boat,” marveled PB driver Bob Teague. “It’s a big boat on the trailer, but feels light and nimble on the water.”

For all of its visual appeal, the MTI has made its mark at full throttle, and as in the Broadway production, the Phantom did not disappoint in the end. After enjoying the relaxed sensation of a 4,000 rpm cruise, to a 95-mph pace, we moved the big machine up the ladder. Each prod of the throttle was answered in kind, and we picked up between 10 and 20 mph with every additional 500 rpm. We ran 104 mph at 4,500 rpm and 120 mph at 5,000 rpm, and used up only another thousand revs to find 150 mph. On the way to cresting at 165 mph, the ride and feel of the boat remained controlled, predictable, and solid.

Please keep in mind that all of this was achieved at 100-degree heat on the test course, a condition the 1350s treated as just another number on the SmartCraft screen.

The Bottom Line: Unfettered by the constrictions of an ordinary being’s recreational budget, this is the boat that the experienced, informed, and connected sport boater should own. At this level, you expect the extraordinary. Phantom left that level in its back wash, and made $1.3M look like the deal of the day at our tests.