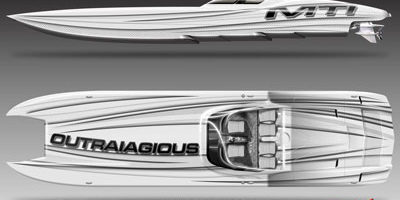 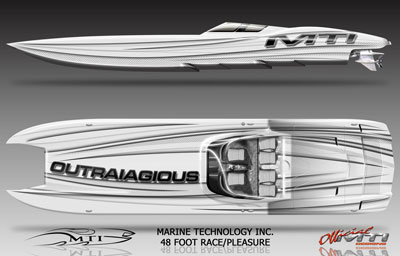 When a long time boat owner decides to create a build to top all he has done before, rather than dive into hours of details, review and approve renderings and proofs. Dennis Raia simply tells Randy Sweers of Fastboats Marine Group to build it and let him know when it’s done.

Of course this wasn’t the first build for Mr. Raia that Mr. Sweers has accomplished, but by my estimation it is the very best, and arguably the best 48 MTI done to date.

OUTRAIAGIOUS is Mr. Raia’s third MTI and his fifth performance catamaran. Starting out with a 36 Nor-Tech in 2004 then on to a 43 Nor-Tech with Mercury Racing 1075’s. The other two MTI’s were both 42’s with 1075’s. I remember being at the Key West Poker Run in 2009 just months after he had taken delivery of his first 42. A new 42 had been brought down to display in poker run village by David Woods of Pier 57 without power and was for sale. Even though he had just taken delivery of the his first 42, Mr Raia liked the paint on the new boat so much he bought it on site and had his engines and drives swapped to the new one.

The new 48 build had some special requirements and had to be done in a certain way. It could not just be another boat with a fancy paint job. This build had to be special, attention to detail, and a sophisticated style and look. This was achieved by using the styling cues from Fastboats Marine Group who has always brought a leading design and fashion edge to American Powerboating using the familiar black and white theme from their 40 foot MTI raceboat, the design of “OUTRAIAGIOUS” began. The end result was a meticulously detailed high performance cat.

Click here to read more, or see some exclusive pictures of this new cat.