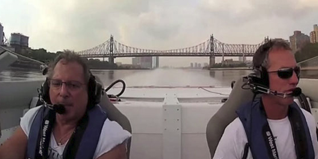 Why it matters: In a year that saw dwindling offshore racing fleets, the loss of the sport’s best-known raceboat and diminishing fan interest, Hayim and Tomlinson sparked interest in the foundation of the sport—running hard offshore. They also reportedly raised $65,000 for cancer research.

What happened: In a bit of a surprise, owner Randy Scism and the gang from Marine Technology Inc. showcased a prototype version of the MTI-V 42, the company’s highly anticipated center console, at the Lake of the Ozarks Shootout in Missouri at the end of August. Dubbed the Performance Validation: V-001 vessel, Scism provided demo rides for a few days surrounding the top-speed event.

Why it matters: This new 42-foot model—the first V-bottom from MTI—is going to be a game-changer. With a patented hull design and MTI’s brilliant fit and finish, there’s no doubt the boat will bring a new level of performance to the center console market. Surely it will be one of the highlights of the 2013 Miami International Boat Show.