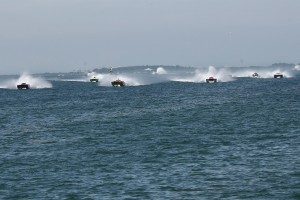 Clearwater, Fl. (September 20, 2013) – Super Boat International teams have raced all season and are now ready for the final race in the National Points race competition. Teams will compete Sunday, September 29, in the 5th Annual Clearwater Bright House Super Boat Championship event. This is the 7th race of the offshore race season and, with a very tight points race, the National Champion will be crowned Sunday afternoon.

“There has been some great racing all season and, when we come to Clearwater, everyone is ready to put on a great show,” comments Super Boat International President, John Carbonell. “Frank Chivas, Brian Aungst, and the entire Clearwater team along with their media partners really do a great job of promoting the race. The proof is seeing 5,000 spectator boats lining our course and fans all along the beaches. Getting good support is necessary so we can put on a great race and have a good showing for our fans. I know our teams are ready to race, so it will be a fun-filled exciting weekend,” comments Carbonell.

Fans can expect the biggest and fastest boats to take to the waters of Clearwater Beach. This season teams, STIHL, WHM, JD Byrider, Spirit of Qatar, and Red Hot Racing to name a few, have put on a great display of competition. We have seen lead changes back and forth from lap to lap in many classes and teams have been deck to deck all year. This year many of the racers have seen bumpy conditions from race to race, so it has been a true offshore season. Years past many of the racers saw flat conditions from race to race, but this year, it has changed.  And, as for the upcoming World Championships in November, racing conditions in Key West are always unpredictable.

Lucas Oil / MAV TV, one of the fan favorites in the Super Boat Extreme class, should be pumped and ready to do battle for a National Title. The Extreme class has become very popular since the inclusion of boats of various horsepower, lengths and styles. They have been combined to run against each other with the only regulation… they cannot exceed 117 mph. If they breakout over this speed, they are penalized. This has allowed Super Boat to reduce the number of classes, while at the same time, improving the competitiveness of the teams in various classes.

With the broadcast area so close to the pits and the racecourse, we are encouraging racers to be a guest on the livestream show when they are not racing. We have had many racers as guests on the show and they always add an interesting twist to the livestream.  Maybe you are our number one Super Boat fan and want to be on the show… give us call and we’ll see what we can do.  If you can’t make the race, tune in online and see what is in store for the spectacular event coming up in Clearwater.

This year, our Sunday races will be streamed on the Official Super Boat International Livestream, here so you won’t miss any of the action, if you can’t make it to the beaches. Or if you’re on the beach, you can watch and listen to it on your smartphone. On the Livestream page, listen to the race, see the interviews, chat live and watch all the action as it happens. Fans can stay connected with us at superboat.com and Like Us on Facebook for all this year’s news. The Super Boat schedule is posted through 2013 and 2014 with the next races coming up Clearwater and Key West, FL.