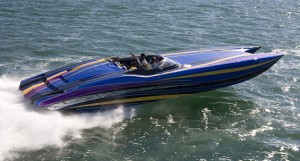 Tim Gallagher has some pretty exciting things planned for the events surrounding the Miami International Boat Show, including an MTI-ONLY lunch run during the Florida Powerboat Club’s Islamorada Poker Run. There are already over a dozen MTIs currently signed up, so don’t miss out! For a preview of what you’ll see in Miami this weekend, check out a portion of the article by Jason Johnson of Offshore Only below, or click here to read it in full.

As is normally the case, the Florida Powerboat Club’s Miami Boat Show Poker Run, which takes place February 20-23, is expected to feature many of the boats showcased at the Miami International Boat Show just days after it ends. From exotic Marine Technology Inc. (MTI) catamarans to smoking-hot center consoles, there will be plenty of impressive new equipment to gawk at.

You can be sure performance boat enthusiast and well-known FPC member George Argyros will be checking out the latest and greatest at the lunch stop and the run’s final destination—Islamorada—while taking part in the event in his own “new” toy—a 2013 44 MTI with a pair of Mercury Racing 1100 engines.

Argyros, who hails from Southern California and has been participating in FPC events with his wife, Shannon, for several years. They purchased the 44-foot catamaran with roughly 50 hours on it last December through MTI and was able to enjoy it just a few times before retreating to Utah for a couple of months this winter.