Photo Courtesy Of Hammer Down Boating

Hammer Down Boating recently caught up with Randy Kent, Driver for the #88 Marine Concepts MTI, earlier this Spring for a quick interview regarding the 2014 racing season. Check it out below! 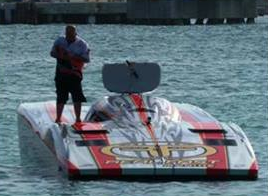 Photo Courtesy Of Hammer Down Boating

The Marine Concepts MTI Catamaran was undergoing repairs, following an engine fire in Key West. It will be powered by a set of new Boos motors, and Randy and Reggie will sure to bring excitement with them onto the water later this season. The day of the interview, the MTI was due to arrive at Visual Imagination for repainting. Here’s the latest from Randy:

On the progress of the repairs, after the engine fire in Key West: “The boat is all fixed body wise, and is going back to Visual Imagination on Thursday for paint. New Boos motors are going together now; Whipple stepped up as a sponsor this year. Big HP is coming soon.”

How much HP will the new Boos motors deliver: “Hate to say for sure right now. It’s a brand new package that Whipple came up with, for people with 1075’s that want the HP of a new 1350/1650 Mercury, without buying new motors and re-rigging their boat. Not sure we will have as much as Geico, but I don’t think we need that much to beat them. You saw what we did in Key West with just 1200 Mercs, so more HP will make it a whole new ball game.”

When do you expect to have it all back together for some seat time: “Not sure… keep in mind, when we raced in Key West, the boat was my pleasure boat. After Key West, I decided to make it a full race boat. Reggie and Leon at Real Fast gutted the boat, took everything out that didn’t need to be there, got rid of a lot of weight to help in acceleration. Once Visual Imagination is done, Reggie will re-rig the boat with a full race setup. It will be an animal.”