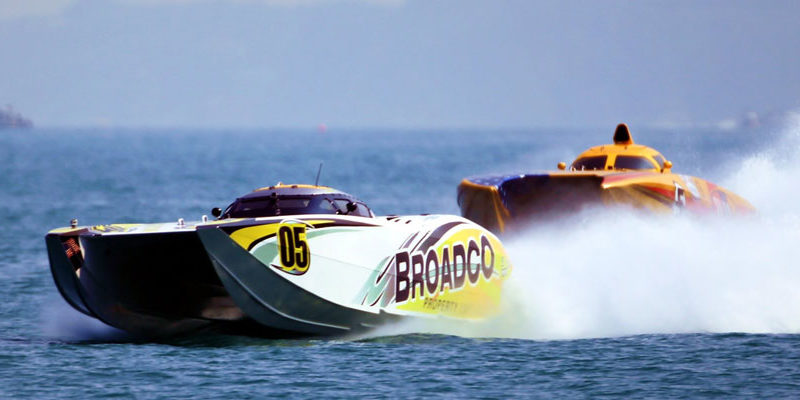 Below is some awesome coverage by Speed On The Water Magazine, featuring the 40′ Broadco MTI Catamaran’s win over the weekend in Michigan City.

After starting the 2014 Super Boat International (SBI) season with a pair of second-place finishes and one third-place result, Team Broadco took its first Superboat-class SBI victories of the year over Stihl in Michigan City, Ind., yesterday. While Broadco prevailed last weekend at the Offshore Powerboat Association (OPA) Super Cat race in St. Clair, Mich., the 38-foot Stihl catamaran came into Michigan City with podium-topping finishes in the first three races of the SBI season.

“We called our setup right for both races,” Broaddus said. “Testing yesterday was invaluable because we learned what we didn’t want. We had something we thought was the right call but changed after yesterday’s test session, and it worked perfectly. The whole ‘Skater Nation’ thing is history,” he added—in reference to his Stihl team rivals—and laughed. “It’s an ‘MTI Mecca’ now.”

If you couldn’t make it out to the race this weekend, you can catch up with all the action via the Super Boat International Official Livestream, here.