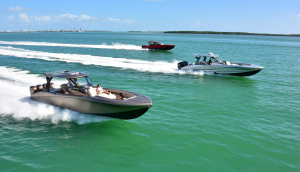 Check out this awesome feature from Speed on the Water Magazine!

With much of the country dealing with freezing or close-to-freezing temperatures, today’s Image of the Week should bring a little warmth to your day. Shot by the Florida Powerboat Club just prior to last month’s Key West Poker Run, this picture captures a trio of luxurious MTI V 42 models as they cruise along Miami’s Biscayne Bay on a beautiful South Florida fall day.

The champagne-colored 42-foot sport utility boat in the foreground was the only one that did the poker run to Key West, Fla., and it got a lot of attention during the event considering it was MTI‘s first V-bottom with the European-style rear sun pad ahead of the quad Mercury Verado 300 engines.

The silver boat is the Wentzville, Mo., company’s most recently completed V 42—it was finished just in time to be displayed at the Fort Lauderdale International Boat Show in late October. According to Tim Gallagher, MTI‘s sales and marketing manager, the boat will spend some time in Miami before being shipped to Italy to join up with the owner’s soon-to-be-finished Benetti Yacht.

The red model in the distance is the first completed MTI-V 42, which was delivered to its Miami-based owner in early 2013 and has since becoming well known by the South Florida boating crowd.

While it wasn’t easy to picture MTI building V-bottoms a few years ago, it’s hard to imagine the company without them now. Especially considering it is running two dedicated V assembly crews at the moment in order to keep up with promised delivery dates.