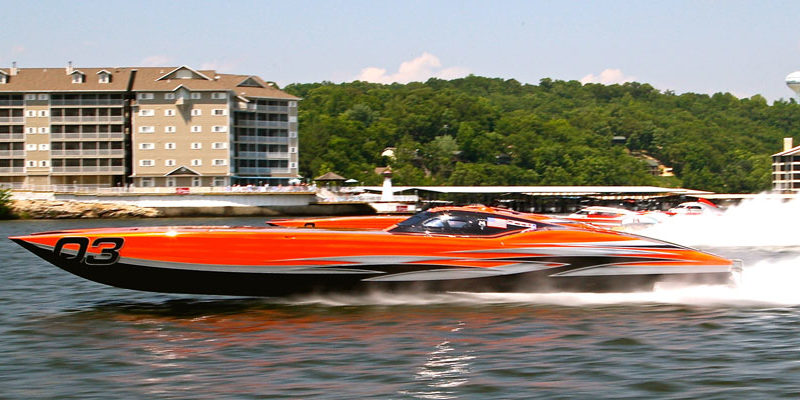 Check out this stellar feature from Speed on the Water Magazine, spotlighting the CMS MTI Catamarans and Offshore Race Team, below!

Missouri’s Bob Bull could be one of the most publicly quiet—if not the most publicly quiet—competitors on the offshore racing scene today. To call the generally laidback, soft-spoken Lake of the Ozarks, Mo., local “soft-spoken” would be an understatement. (Catch him by mobile phone and you’ll be pressing the volume button in short order—at least if you want to hear him.)

Maybe it’s a Midwestern thing. Maybe it’s his nature. Or maybe Bull prefers to let his CMS team Marine Technology Inc., catamarans do the talking for him. After all, with 52- and 48-foot MTI canopied racing catamarans, plus another MTI “pleasure cat”—all of which share the same color scheme—in his stable what really is there left to say?

The same holds true for his fellow CMS team members Randy Scism, John Tomlinson and Jeff Harris, who combined have enough world and national offshore racing championship trophies to fill a small warehouse. While they’re all gracious and friendly, none of these folks could be described as “chatty.”

As reported on speedonthewater.com earlier this year, the CMS offshore racing team plans to show up with two boats in the Unlimited class in every Super Boat International race it attends. It’s a history-making effort and one that speaks for itself.