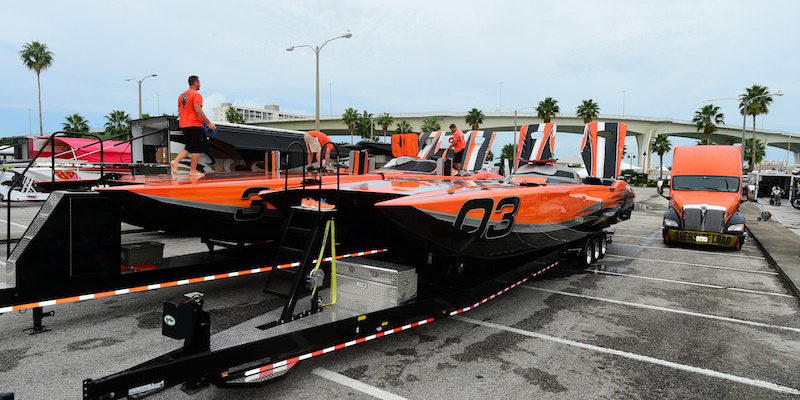 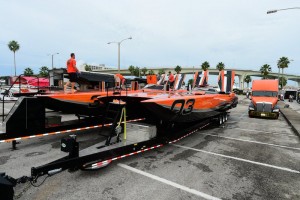 In spite of a throttle/control problem, the #03 CMS 48′ MTI Catamaran was able to accumulate enough points during the 7th Annual Bright House Clearwater Super Boat National Championship race to claim the National Championship Title! Not only that, but the #3 CMS 52′ MTI Catamaran took first place in the race as well! Check out the article below, from Offshore Only, featuring an interview with John Tomlinson of CMS Offshore Racing regarding the event.

Throughout last weekend’s Super Boat International World Championships in Clearwater, Fla., John Tomlinson and Jeff Harris had trouble keeping their 48-foot CMS 03 MTI catamaran moving. And by that I don’t mean moving at 150-plus-mph down the straights and 100 mph through the turns. I mean moving, period.

“We had a throttle-control problem,” said Tomlinson, who handles the sticks for Bob Bull’s smaller Unlimited-class raceboat. “We went from having power to dropping back down to idle with all kinds of horns blowing, to powering back up again. We were able run enough laps to take the National Championship, but Bob and Randy ran really well, and won the race in the 52-foot CMS 3 boat.

“The CMS boats won every race they entered this year,” he added.

Last weekend’s ending was a happy one for Tomlinson, but he hasn’t always been so fortunate. During the 2014 SBI World Championships in Key West, Fla., Harris and Tomlinson were a broken prop-shaft away from a world title on the final day of racing in CMS 03. The year before with owner/driver Tor Staubo in Gasse, another 48-foot MTI cat, he lost steering—and another world championship—during the last race.

A multi-time world champion, Tomlinson takes it all in stride. That’s not to say he doesn’t get disappointed or frustrated when mechanical issues knock him out of a race. Yet it doesn’t surprise him, especially during the challenging three-race format of the SBI World Championships.

“There are three races in the worlds and you have to prepare for all of them in a row,” said Tomlinson. “It’s hard to put three together in a week.”

Remember, if you missed out on all the action of the Clearwater National Championship, you can catch up via the Official SBI Livestream, here.

This article originally posted on OffshoreOnly.com.