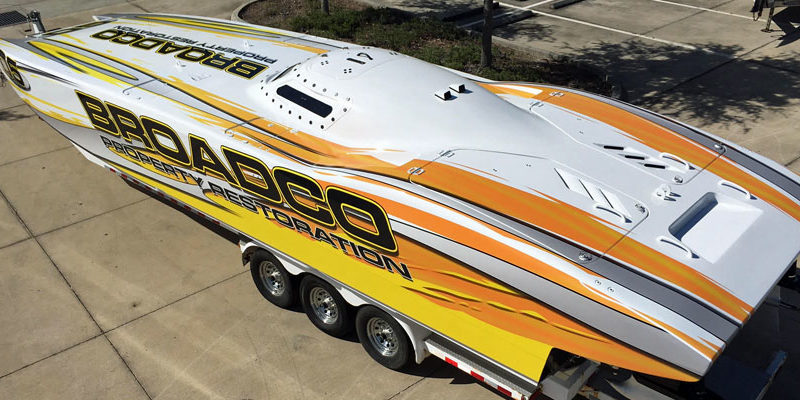 The Broadco Cat 5 Offshore racing team is ready just in time for the upcoming Super Boat International Key West World Championship! For more information on the Broadco Cat 5 return to the SBI Offshore Racing Circuit, check out the article from Speed on the Water, below!

The owner of Grant’s Signature Racing—home base for the 40-foot cat with twin 750-hp Ilmor Marine Racing engines—in Bradenton, Fla., Bruggemann said that he and Broaddus are ready for Key West after running approximately 36 miles today on Sarasota Bay.

“Everything went great, even better than expected, “he said. “We put in the drive spacers that we want to race with in Key West, and we picked up some handling, acceleration and top speed at the same time, so it was a great day. We made the best of all the boat traffic out there on the bay, made some hard left turns and were even able to figure a ‘small course’ where we could run a few laps.

“We knew what we were looking for based on all the setup notes and data we’ve collected, so it was uneventful,” he continued. “We did notice better top end with the same props, and that’s due to the new modifications MTI made to the boat. With everybody—MTI, Ilmor, all of our sponsors—its been a joint effort. We’re stoked. As we speak, the boat is getting washed and flushed, and then it will get all stickered up for Key West.”

The first race of the SBI Offshore World Championships in Key West is Wednesday, Nov. 11. At present, nine boats—including Broadco—are registered in the Superboat class. A total of 40 boats are registered across all classes.