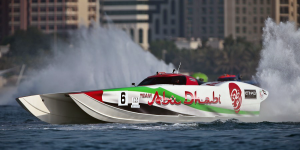 Speed on the Water recently published an article covering the 2015 Union Internationale Motonautique (UIM) World Championship ceremony, which included the presentation of the Class 1 World Championship title to Team Abu Dhabi, powered by a 48′ MTI Catamaran. Check out the feature, below.

Joined by representatives from the Abu Dhabi team, John Tomlinson accepted the 2015 Union Internationale Motonautique Class 1 World Championship honor during an early March ceremony in Monaco, the home of the powerboat racing’s international sanctioning body. Tomlinson throttled a 48-foot MTI catamaran for the team with fellow Florida-based offshore racer Gary Ballough behind the wheel during the four-race 2015 Class 1 season.

The festivities began with a luncheon, followed by a press conference and a break before a cocktail party and gala banquet that evening. Year-end awards were given to competitors in various forms of powerboat racing throughout the luncheon and banquet, but the final honor of the evening went to the Abu Dhabi team for its signficant Class 1 achievement—the circuit has been dominated by the Victory Team for the previous eight years. 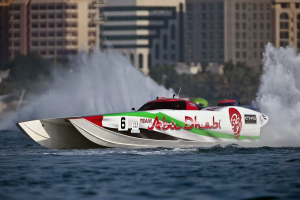 “They gave out 74 awards,” said Tomlinson, who won a Class 1 World title in 1997 with driver Laith Pharaon. “They started at 3 p.m. and finished around midnight. It’s very cool—they make a very big deal about it, and it’s very formal event with entertainment throughout the evening.”

Tomlinson and his Abui Dhabi teammates received two honors—the Sam Griffiths Trophy, which was engraved with Tomlinson’s and Ballough’s names but is kept at UIM headquarters in Monaco (Tomlinson received a replica of the award to take home to Miami) and the 2015 UIM Class 1 Trophy. That, too, was engraved the names of the North American drivers who earned it. (Neither Ballough nor MTI’s Randy Scism were able to attend the event.)

“I gave the Class 1 trophy to the Abu Dhabi guys so they could take it the to the Marine Club there,” said Tomlinson.