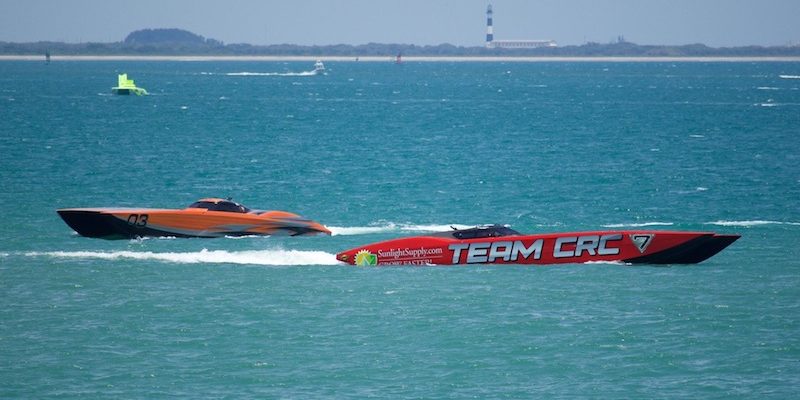 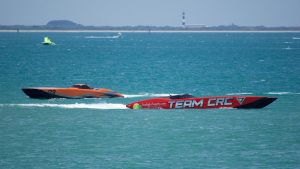 Picking up right where he left off last season, defending Unlimited-class world champion Bob Bull teamed up with throttleman Jeff Harris in Wake Effects, a 48-foot MTI catamaran that ran under Bull’s CMS team umbrella in 2015. The team took an early lead in the 14-lap contest and never let it go. Wake Effects is an MTI dealer at the Lake of the Ozarks in Central Missouri. Team CRC/Sunlight Supply, another 48-foot MTI cat, driven by owner Mike DeFrees and throttled by Ballough, finished second.

While Bull and Harris were teammates in different MTI catamarans on the CMS team last year, today’s race was the first time they shared the cockpit. Bull filled in on Sunday for Wake Effects’ Rusty Rahm, who was attending his daughter’s high school graduation this weekend. During the race, the duo saw speeds of more than 160 mph—not a common occurrence at the Cocoa Beach venue.

Check out the gallery, below, of some slick shots of the Wake Effects MTI Catamaran on the water for the 7th Annual Space Coast Super Boat Grand Prix! The first race under the new team, Wake Effects, went off without a hitch as the weekend was started with a great practice day followed, by a dominant performance in the race.

This article is originally posted on Speedonthewater.com.