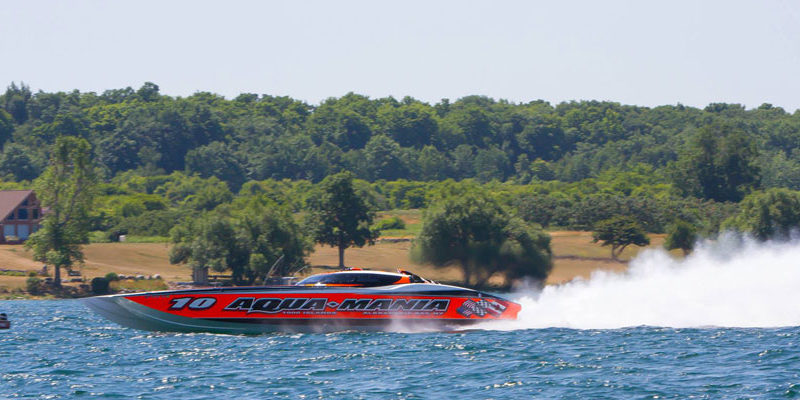 Check out the article, below, by Eric Colby of SpeedontheWater.com, featuring an exciting new update from Aqua–Mania Offshore Racing!

Gregg Rosen, the owner of G3 Race Team, and his partner/throttleman Rick Merola have decided to take a new direction. The former world and national champions in the Superboat Unlimited class in offshore racing have a new boat that has been designed and built to go after endurance records. Rosen said that Merola, who owns Aqua-Mania, Inc., a boat dealership and service center in Alexandria Bay, N.Y., came up with the idea of going after endurance records. “We don’t want to stop,” said Rosen who owns Kimco Steel Sales, Ltd. in Kingston, Ontario. “I enjoy it. It gives us something else to look forward to other than go for a boat ride. We’re going for a boat ride for a reason.”

The team’s new boat is an MTI 52-footer that accommodates six people strapped into custom-designed suspension seats in the enclosed cockpit. It flies the Aqua-Mania name and has six fuel tanks with an overall capacity of 1,016 gallons. Power is provided by twin turbine engines maintained mated to BPM surface drives. Merola asked MTI to raise the tunnel by 2 inches to help spill the air when the boat hits extremely high speeds. It must have worked because the second time out, with six people aboard, he and Rosen hit 201 mph.

Among the technological upgrades the team hopes to implement on the new Aqua-Mania is a new computerized management system for the engines and fuel delivery. For a full description of the boat and all of its high-tech goodies, check out the feature I’m working on for the next issue of Poker Runs America magazine. Rosen bought the boat in August 2015. The team had planned to go after its first endurance record, Miami to New York last month, but the boat isn’t ready and Merola and Rosen aren’t about to rush. They brought the boat out for the Alexandria Bay Poker Run last July, but couldn’t run at full speed because they were having issues with one of their drives that wasn’t repaired in time for the 1000 Islands Poker Run in August.

That means we will have to wait another year before we see the team attempt to break the record. Both Rosen and Merola said that late August is the best time of year to go after the mark because of weather and sea conditions. Rosen said that he will keep the performance-boating community updated on any record attempts on his team’s website, and on speedonthewater.com and on other performance-boating websites. When the boat is attempting to break a record, the event will be streamed so fans can follow its progress online.