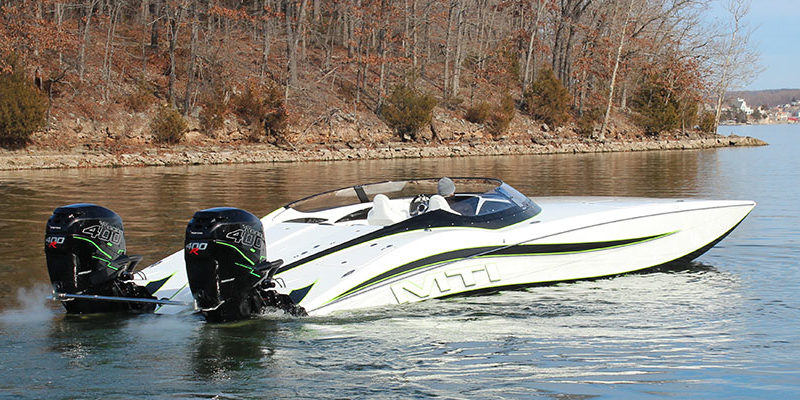 According to Blake Kelly, sales manager for Wake Effects, the boat received a ton of attention throughout the first two days of the show. He said there’s even been some serious interest in the white, black and green stunner, which is front and center in the company’s display between four MasterCraft models (a X26, XT23, NXT20 and Prostar) and three Crest models (a 25 Savannah, a 25 Caliber and a cool 27 Continental with a windshield and twin Verado 400R engines) and a massive MTI-V 42 luxury performance center console behind it.

Kelly, who got to drive MTI’s first 340X from Miami to Key West in the Florida Powerboat Club’s Key West Poker Run with Tim Gallagher, MTI’s sales and marketing manager, said the new 340X performed flawlessly during a shakedown test last week with Randy Scism, the owner and founder of MTI.

“The boat is so smooth and easy to drive,” said Kelly, who added that the 340X is expected to be on display (if it’s not sold) at the St. Charles Boat Show (March 9-12). “I drove it while Randy throttled and it handled perfectly. It really is a great boat for Lake of the Ozarks, although it’d be a great boat in almost any water in my opinion. The boat cruised effortlessly around 100 mph. We ran it above 110 mph but not for long as it was a brief test run and we weren’t propped for top speed.”