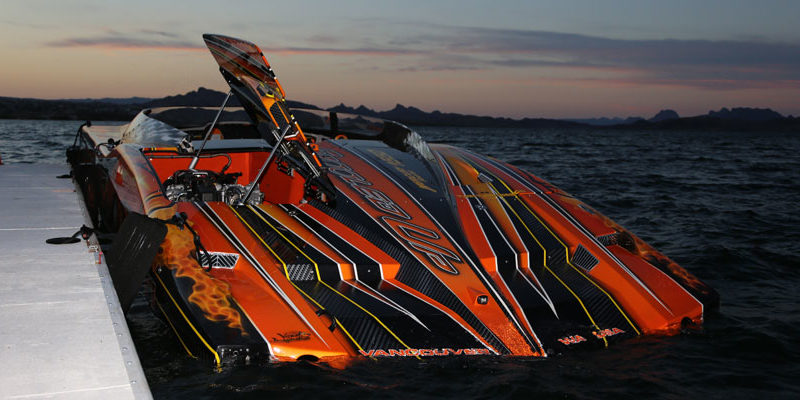 The Hagreaves’ 52′ MTI Catamaran was spotted at the Desert Storm Poker Run, and recently featured as Image of the Week on Speed on the Water.

One thing you can always count on from the Desert Storm Poker Run is a bounty of high-horsepower hardware in a starkly beautiful setting. Despite that last week’s event in Lake Havasu City, Ariz., faced its share of challenges—from blistering heat on the poker run and street party days to postponement and eventual cancellation of the top-speed shootout—that held true once more this year.

Owned by Craig and Kim Hagreaves of Washington, this 52-foot MTI catamaran dubbed Spooled Up and powered by Mercury Racing 1550 engines proved to be an attention-getter on McCulloch Boulevard during the street party and on Lake Havasu for the poker run. But the slippery-fast beauty struck perhaps its best pose sitting still at sunset on Saturday.

This article was originally posted on SpeedOnTheWater.com.