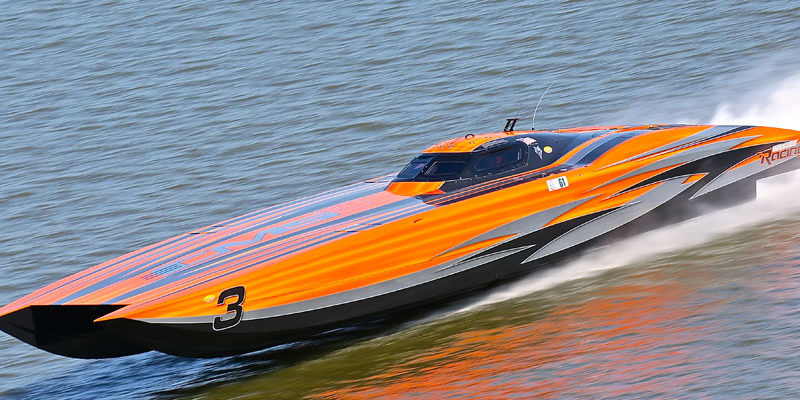 SpeedontheWater.com is one of the premier resources for all things powerboating, poker run, and offshore racing related. As they do annually, the writers at SOTW featured a series of recaps covering the 2017 LOTO Shootout, including a section about Bob and Debbie Bull‘s high-speed runs over the weekend. Check out a portion of the article, below.

A Big Day for the Bulls
Newly inducted Lake of the Ozarks Shootout Hall of Famer Bob Bull put a lot of work in all weekend—and on Sunday his wife, Debbie, did the same. Bob backed up his 177-mph pass on Saturday in his 52-foot canopied MTI catamaran powered by twin Mercury Racing 1650 engines with the same speed on Sunday, and his wife, who was joined by the same throttleman—MTI founder Randy Scism—tried to beat her husband but ended up one mph shy at 176 mph.

“I think I need a new throttleman—Randy was holding back, I know it,” Debbie said with a laugh. “Seriously we had a great time this week. It was fun to get to run both boats and feel the difference.”

Earlier in the day, Debbie also took out their matching 48-foot open-cockpit MTI and ran it up to 145 mph with Scism by her side.

Bob also took to the course with his new 340X MTI powered by a pair of Mercury Racing ROS outboard engines and ran 115 mph, which was 15 mph better than his speed on Saturday.