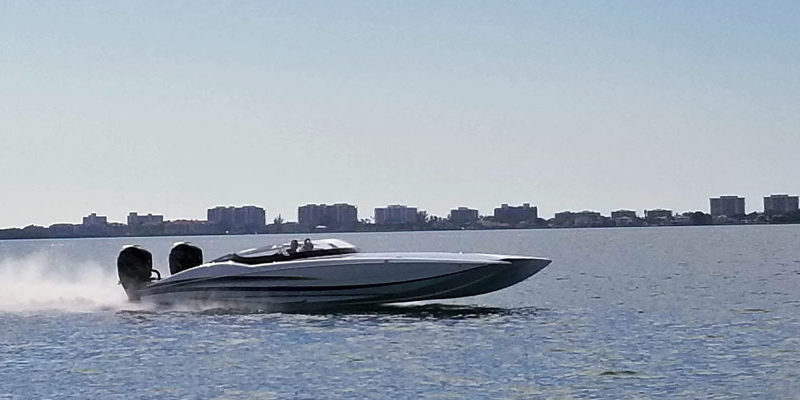 Proving that good things really do come in small—relatively speaking—packages, New Jersey-based Bob Christie is delighted with his new Marine Technology, Inc., 340X catamaran. MTI’s Tim Gallagher delivered the 34-footer, which is powered by a pair of Mercury Racing Verado 400R outboard engines to Christie and his wife, Madelyn, at their second home in Sarasota, Fla., yesterday.

With five people on board and the cat’s 160-gallon fuel tank three-quarters full, Christie ran the boat again today to 110 mph on Sarasota Bay before taking a lunch break. He expects it to top out at a little more than 120 mph.

But what Christie said he appreciates most about his late Christmas gift to himself, which he plans to run in the MTI Owners Rendezvous from Miami to Marathon in early March, is its overall ease of use.

“We were running 110 mph and the boat didn’t do anything that made anyone uncomfortable,” he said. “Thanks to the outboards, it was so quiet that we could talk to each other. It runs so well, and it’s so easy to drive. And it’s so easy to trailer. You hardly know it’s back there.

Added, Frank Civitano, Christie’s longtime friend and former service manager at Typhoon Marine in New Jersey, who joined him today on the 34-foot beauty, “I think he’s going to like it even more than Speed Racer.”

CLICK HERE to visit speedonthewater.com for article and all photos.